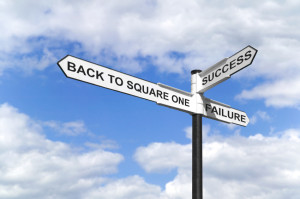 It's generally believed that roughly half of all M&A deals succeed. An article on Forbes.com put it this way: "basically a coin toss." We'd like to believe that there's more to success or failure than chance. With that in mind, let's look at why some deals go bad so that you can avoid making the same mistakes.

-Valuation differences - Big differences in valuation mean that coming to an agreement on price will be inherently difficult. Something must give, and often, the entire deal falls through because neither party is willing to give up too much ground.

-Insufficient management capacity - A company may be based on a brilliant idea but if its management team has proven itself incapable, the acquiring company may hesitate or pull out altogether. Similarly, is management capable of leading the team through a merger or does it lack the capacity to both run the business and blend it with another?

-A cultural mismatch or poor strategic fit - Imagine a tech company that encourages a casual, creative work environment merging with a traditional firm with a strict professional dress code and rigid work hours. A culture clash would be inevitable. In addition to cultural fit, another potential mismatch involves strategy. Do both companies share a similar vision? Are their strategies compatible? Mismatches in either of these areas could quickly doom the deal.

-A lack of good faith or wavering comfort levels - As M&A talks progress, a lack of good faith or outright bad faith behaviors such as leaking confidential data may cause one company to pull back. Trust, good faith, and reassurance can help a deal proceed while the opposite can stop it in its tracks. No matter what your comfort level, using a virtual data room can help to ensure that your confidential data is appropriately shared and protected.

-External factors - Unforeseen external events could also cause a deal to fail. For example, solar power is a clean, renewable, and relatively non-controversial resource. However, what if you were getting ready to acquire a solar company only to find out that tax incentives would soon be replaced by tax burdens? What if a report reveals a major environmental concern that didn't previously exist? You might pull out of the deal because of these new external factors.

-Better options exist - As they say, the grass is always greener... If another opportunity presents itself and it's a better fit, one deal may be discarded in favor of the other.

Deals fail all the time for reasons as varied as those listed above, and then some. The due diligence process is likely to uncover even more reasons why a given deal may or may not be right for you. Pay attention and don't let your deal's success or failure be left to chance.