Recently, much has been said about how “hot” the technology M&A markets are. When we talk with founders of various technology companies, they always refer to a recent large transaction with a 20x revenue multiple, insisting that their company is just as valuable. Yet, the reality is often very different. And, if the M&A market after the pandemic has taught us anything, it's that there’s a lot more variability in valuations between the top, the middle, and the bottom of the market.

In this blog and webinar, Tech M&A: Unlocking Key Factors that Influence Valuation, we’ll be exploring the concept of what really drives valuations in the tech sector.

The problem is, the typical technology M&A deal doesn’t happen at 20x revenue. Bigger deals at those valuations are very hard to come by for smaller companies. As an example, if we look at the largest deals since the beginning of 2020, we get to an average multiple paid for the top 10 deals of 15x (as depicted in figure 1 below). 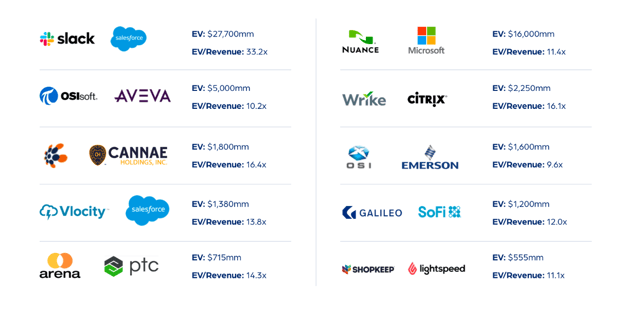 However, if we just look at the “cream of the crop” it is a very distorted view of the world that is presented.  For example, if we look at software revenue multiples over the last few years, which have been the real driver of valuation increases in the tech space, the median has actually stayed pretty constant at around 3.5x (see Figure 2). So why the large distinction between the top 10 transactions and the median? And how does this impact the value of your company? Over the last five years, we have become relatively skilled at predicting what factors a value will likely be driven by. In particular, scale (revenue size), and growth are both of increasing importance. The size factor can be seen clearly in the following chart that depicts average multiples by revenue size of the acquired company (see figure 3). 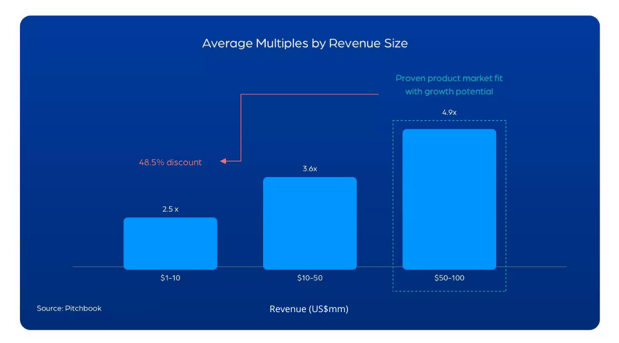 While revenue size is one of the more important factors, if it doesn’t go hand-in-hand with growth then it will likely not be a good outcome. A business with zero to negative growth is very difficult to sell, no matter what the size. Unless the buyer thinks they can turn around the growth story and make it positive again.

In addition, buyers are also laser-focused today on recurring revenue, gross margins, profitability, retention (specifically for software businesses but also relevant for other technology companies with recurring or repeat revenue), and total addressable market. If one of these metrics is not strong, then it will likely impact valuation significantly.

To learn more about how these factors drive valuations, access the webinar Tech M&A: Unlocking Key Factors that Influence Valuation.

This webinar was co-hosted by SecureDocs Virtual Data Room and Sampford Advisors. Access the webinar here.

Ed Bryant is President and CEO of Sampford Advisors, an M&A advisory firm for US and Canadian mid-market tech companies. Ed has 25 years of experience, including over 21 years in investment banking with Deutsche Bank, Morgan Stanley, and Sampford in Hong Kong, Singapore, and New York. In that time, he has raised in excess of $20 billion in equity and debt capital and completed over $10 billion in M&A transactions.

5 Things to Look for in Virtual Data Room Providers

Customers Once Again Rank SecureDocs as a Top VDR