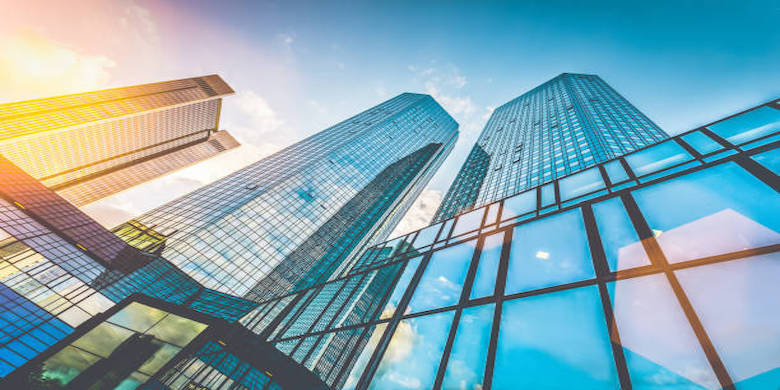 The reason for this exceptional year, in one way or another, is related to the continued impact of the COVID-19 pandemic.

No matter how you slice it, the tremendous surge in M&A, both on a broad level and in terms of acquisition targets, was driven by the powerful, persistent impact of the pandemic on the global economy. 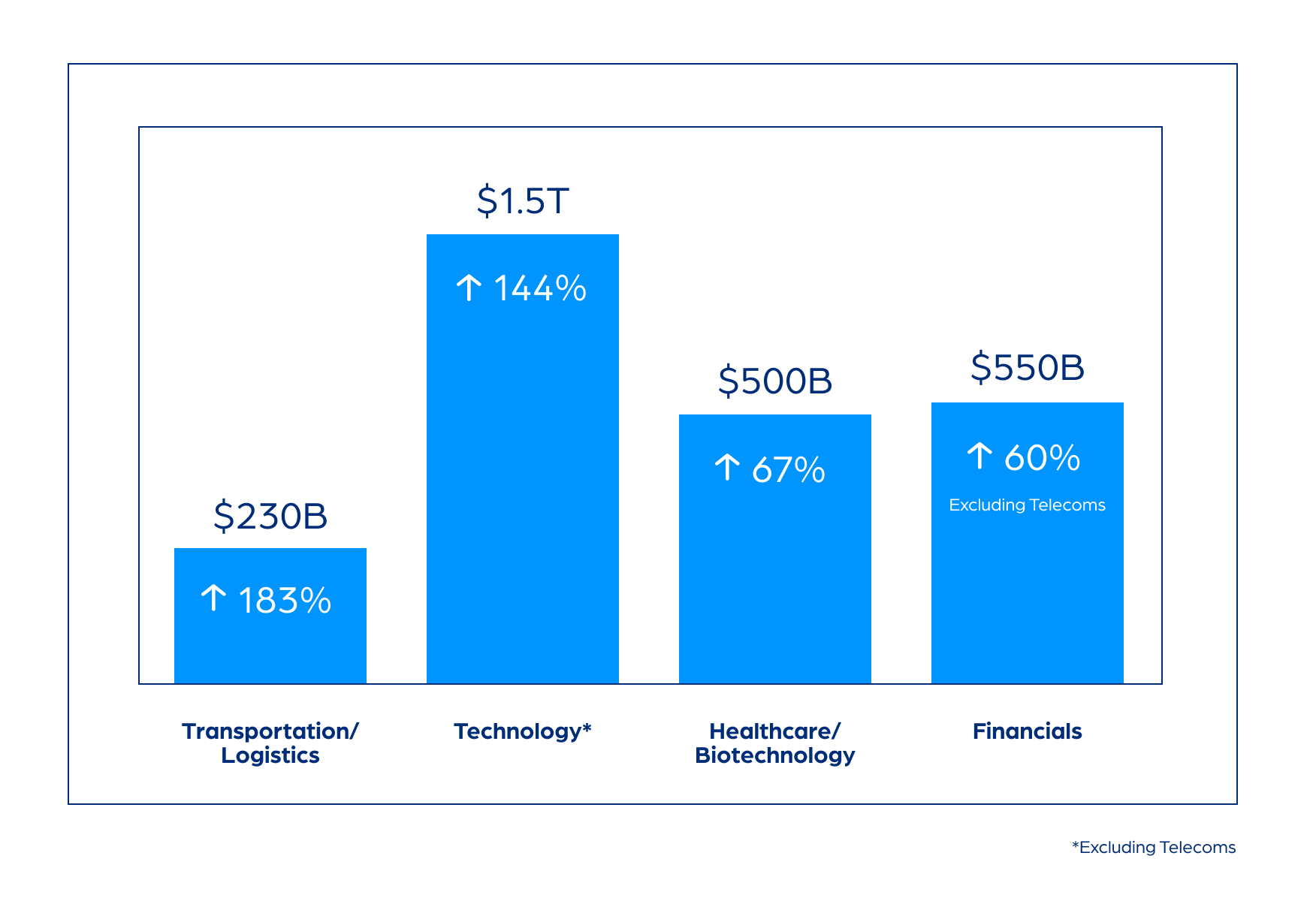 The sectors above were among the fastest growing for M&A in 2021. Financial firms, like many other industry players, have been gobbling up tech firms to keep up with the times and better digitize their business. Transportation and logistics was one of the most important (and vexing) issues for many companies this year, as shipping backlogs plagued the global economy. Technology and healthcare companies across the board, particularly those that enabled virtual services, proved not only resilient but thrived during the pandemic, and so proved to be valuable targets and able acquirers in 2021.

An interesting case this year was the semiconductor industry. Semiconductors are quickly becoming the cornerstone of every company’s supply chain security, causing both the private sector and public regulators to pay close attention to the competitive health of the market, as well as individual companies’ access to them. It makes sense then that while total deal value in the sector actually dropped from $140 to $50 billion, the number of deals increased from 146 to 202. That means the average M&A deal for the sector fell from roughly $1 billion to just $250 million.

This shift toward more numerous, smaller acquisitions is likely due to companies seeking to acquire a very specific type of semiconductor producer, small enough to evade regulatory scrutiny, but large enough to absorb the company’s own demand for chips. As the semiconductor market goes haywire, these firms are looking to move production in-house.

What we saw in the semiconductor industry this year provides a useful metaphor for much of the year’s M&A activity. Rather than companies seeking to grow their size or addressable market, acquiring and merging firms mainly sought to shore up some perceived weakness exposed by the pandemic. This means buttressing ailing supply chains through more resilient manufacturing and logistics, as well as digitizing to keep up with a world which increasingly demands virtual service.

The year ahead calls for cautious optimism on the macroeconomic and M&A fronts. While economic growth remains strong throughout the year compared to the doldrums of 2020, several stubborn challenges have persisted and will almost certainly weigh on 2022. The three most salient of these challenges are: Omicron, Inflation, and Supply Chains.

Inflation is certainly the economic buzzword in the United States right now. It started ramping up in early 2021, gathering speed throughout the year to a whopping 7% in December. Producer costs, particularly energy, have increased even more, with oil prices recently breaching a 2014 high. Since inflation certainly isn’t going anywhere, and has accelerated throughout the year in most of the world, we expect the issue to continue affecting the M&A space in 2022.

Economists and officials have also recently warned that, due to of the pandemic, supply chains will continue to be constrained.

On January 12, Germany’s largest trade organization echoed these concerns, announcing that the country was faced with “a massive disruption of the supply chain - at least temporarily," as a result of the COVID-19 surge in the country.

Early last year, a famous image emerged of a giant container ship lodged in the shore of the Suez Canal, causing a major logjam. This would prove a perfect symbol of the year’s logistical headaches.

Indeed, supply chains are about as pinched as we’ve seen in recent history. The HARPEX, a cost index provided by shipping broker Harper Petersen to track the cost of international shipping, has skyrocketed during the year. As the chart above shows, the cost of chartering a container ship has soared nearly 10x from a low in July 2020. China also saw its share of traffic jams at busy shipping ports this year, along with huge backlogs at major Pacific ports.

Supply chain woes aren’t all doom and gloom for the M&A market. Logistical problems may continue to boost M&A activity this year in relevant sectors, including manufacturing and transportation. Many firms are completely overhauling their supply chains, choosing to manufacture closer to home and make sure they have their own logistical capacity on-hand, rather than being subject to sharp fluctuations in cost and supply.

Continuity and Change in 2022

We expect the focus on supply chains, healthcare, and technology to continue. However, in agreement with other analysts and surveys of decision-makers, we expect M&A activity as well as spinoffs to be more focused on growth than transformative impact. 2021 was the year of the pivot, while 2022 will likely see more deals centered around vertically integrating, reducing costs, and gaining market share.

This may sound trite, but one of the biggest reasons we expect M&A activity to be strong in 2022 is because it was huge in 2021. Last year’s momentum, which has been strong through Q4, should at least carry into part of 2022. The interest rate environment remains hospitable (for now), and demand remains strong as well. However, that optimistic outlook comes with some caveats.

It’s important to stress that the winds are changing in 2022. The rate environment could very well change if inflation persists at high levels, which could hamper financing, as well as sentiment if the market corrects dramatically. American optimism, as measured by the Business Confidence, Consumer Confidence, and Investor Optimism Indexes, peaked in Q2 and gradually waned in the second half of the year, particularly in Q4. We saw a similar trend in many countries. The PMI (Purchasing Manager’s Index) also fell sharply in December, indicating a contraction in manufacturing activity.

While 2021 naturally stood out as the biggest year ever for M&A value, spinoffs picked up in the second half of the year and will likely continue through 2022. As we discussed in a recent article, many of the same macroeconomic factors which drove last year’s M&A activity also caused large corporations to spin off, including a need to sharpen strategic focus of different business segments and the pressure to continue creating shareholder value in a maturing bull market. Some of the biggest breakups this year were among large and mega cap corporations, including Johnson and Johnson, AT&T, Toshiba, and GE.

Just as we expect robust M&A activity to continue in 2022, the recent uptick in high-profile spinoffs should persist as well.

After a Big Year, Expect the Unexpected

2021 began with unambiguous signs for a big year. The conditions were perfect for M&A activity:

The result was an incredible year, with nearly $6 trillion in mergers and acquisitions.

2022 is starting off on less sure footing, but is still buoyed by many of last year’s factors. Time will tell whether the regulatory, fiscal, and monetary environment remain supportive. The economy is unlikely to see growth at the level of 2021, but consumer demand remains strong despite falling confidence. While we’re hesitant to expect an even bigger year in 2022, there’s certainly reason to expect another big year for M&A.