While Q1’s M&A activity may have disappointed market-watchers, it was still a strong overall year for M&A. Despite surging inflation and economic fears, M&A activity still managed to reach nearly $1 trillion last quarter. That figure is down 25% year-over-year, but it still beats out most first quarters of the past five years.

Dealmaking showed greater resilience than one may expect, proving that companies integrate for a number of reasons and in various economic climates. It also shows that many dealmakers remain optimistic about the future, a feeling that most are hoping can persist through the year, and that the fundamentals driving M&A activity remain in place.

Major deals this year include:

Big Deals on the Back Burner

The first quarter saw the lowest number of deals valued at $10 billion or more since the second quarter of 2020, a possible sign that enthusiasm for the megadeals that defined 2021 and late 2020 may be petering out. Last year was defined by a smaller number of very large deals, illustrated by steady deal volumes and soaring total deal value, particularly in the United States.

The reduction in general M&A activity likely has a simple explanation. Economic optimism is waning as inflation rises along with geopolitical tension, and many companies are preparing for more uncertain years to come. Huge strategic deals may look less appetizing if an economic contraction, or a tougher financing environment due to higher interest rates, is a serious risk.

Another explanation may be that the post-pandemic wave of strategic integrations has begun to lose steam.

Shoring Up, Shaking Out

In our 2021 recap and forecast, we predicted that M&A would shift away from the more strategic, transformative acquisitions that defined 2021, such as firms seeking greater digital integration under the pressure of the pandemic. We expected a shift toward more vanilla deals geared toward cost reduction and growing market share. This already appears to be playing out.

Many of the top deals last quarter were among very similar companies, such as Celanese’s acquisition of Dupont’s mobility and materials segment, TD Bank’s purchase of First Horizon, and Healthcare Trust of America’s merger with Healthcare Realty Trust. These combinations indicate a desire to grow market share, or in the case of Celanese, to protect supply chains from volatile logistics and commodities prices.

An important illustration is the incredible growth in M&A for the American oil and gas industry. M&A value for hydrocarbon companies was up fourfold in Q1, demonstrating a renewed focus on energy as a major input cost and potential strategic advantage moving forward.

Part of this trend is also due to companies having already adjusted to the pandemic, making transformative acquisitions, or otherwise adapting to a new economy. It also may reflect a desire to use the cheap financing still available to make low-risk, profit-maximizing deals while the getting is good. We expect this trend, mergers based on cost reduction, supply chain security, and core market expansion, to continue in Q2 and beyond. 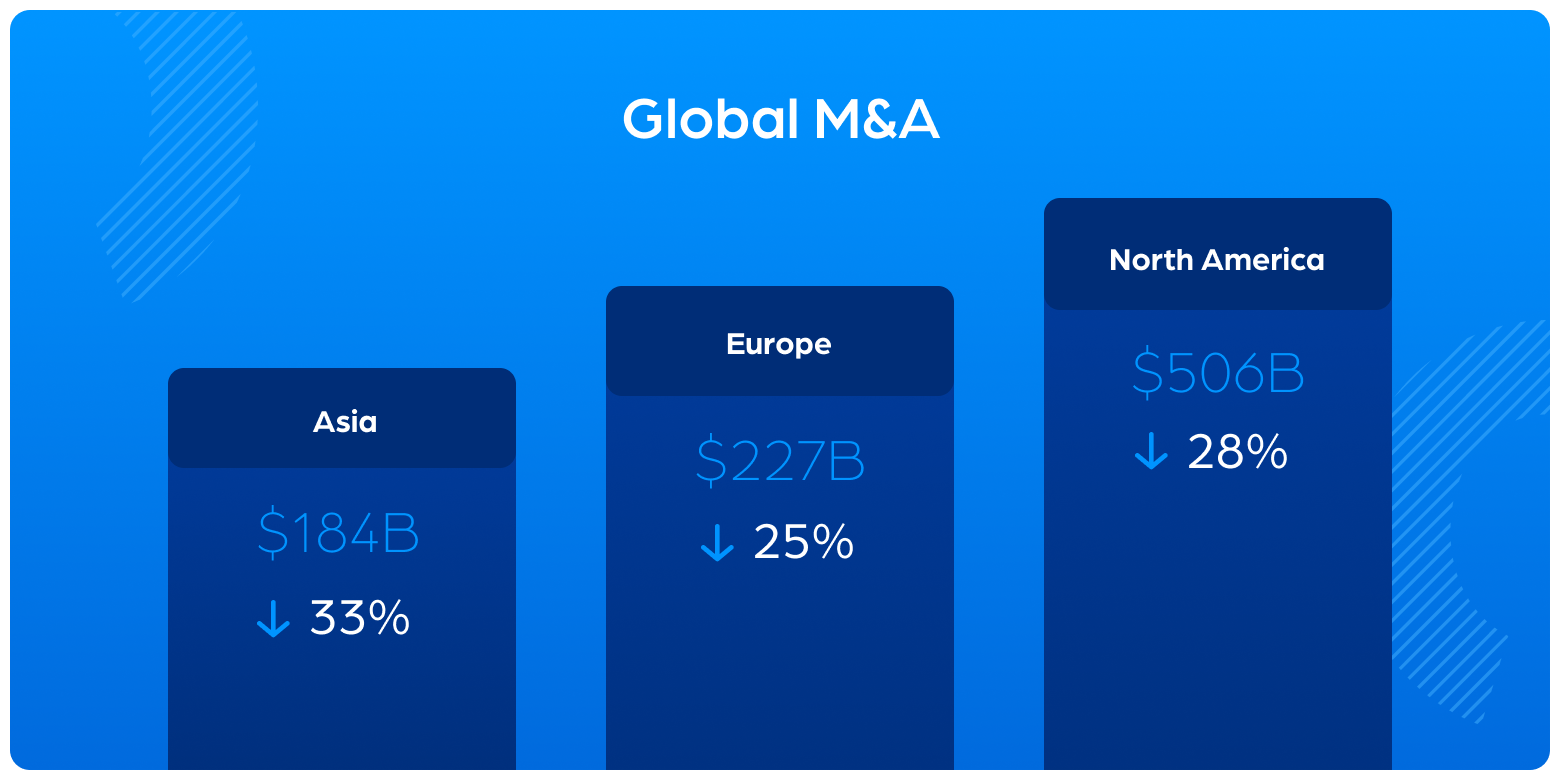 China looks further removed from global capital markets than we’ve seen in decades, facing greater scrutiny of its companies and competitive practices, and it continues a costly “Zero COVID” policy which is cutting into growth. Sentiment in Asia broadly reflects the malaise of its biggest economy.

The main impact on the global economy has been the aggressive sanctioning of Russia’s raw exports, the most important being energy. Oil and natural gas prices have soared, along with most commodities, and economic optimism is down in virtually all of Europe, as reflected in M&A activity.

The United States, while outperforming most of the world, still saw activity drop sharply in Q1. Like the rest of the global community, optimism is waning in the US compared to 2021. The main concern for American deal makers and households alike are inflation and what rising interest rates will mean for the economy.

A sense of optimism and Goldilocks economic conditions launched 2021 as the biggest year to date for M&A activity. While these factors are starting to abate, some experts remain hopeful that 2022 will be another strong year.

Matt Toole, the director of deals intelligence at Refinitive, told Reuters that:

"Despite the headlines, the fundamental drivers of deal-making are still the same." Toole was referring primarily to two key M&A drivers: large corporate cash holdings and low-interest rates.

Both of these factors indeed continue to hold up in April 2022, and so M&A should remain strong, as it did relatively even last quarter. However, it will be important to keep an eye on both cash holdings and interest rates as the year goes on, as a significant change in both (or either) could heavily impact dealmaking.

The 4 Most Important Books to Understand M&A